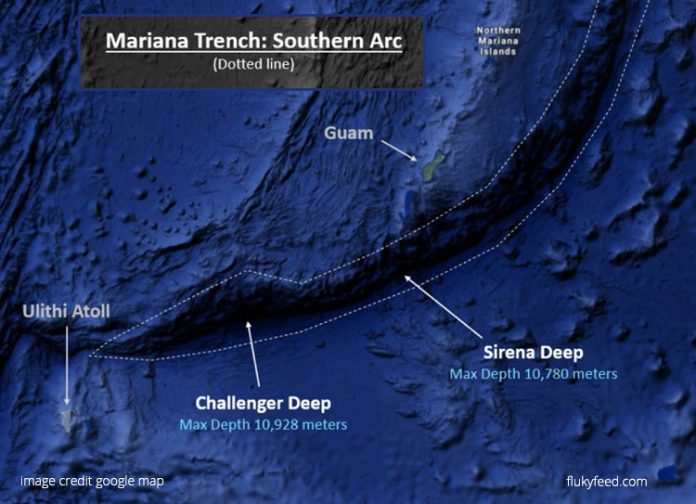 Marianas Trench also called Marianas Trench, this is the deepest location of the earth. Mariana trench is located in the western Pacific Ocean 200km east of the Mariana Island. Mariana trench name because this is a nearby Mariana Islands, which is a crescent shape archipelago. It is crescent shape and length  is 2,550 km and width is 69 km. It is depth is 11,034 meters mean 11.034 km. If Mount Everest were putted the in place in the Mariana Trench it would summit (peak) 2 km below the surface of the water.

At the bottom of Mariana trench water pressure very high because water pressure increase with depth (eight tons per square inch) because it’s have extreme depth it mean more than 1000 fold from the general atmospheric pressure at the ocean level. If human go bottom of the Mariana Trench the massive pressure of the water push the human body and push in to the mouth and filled water in to the lungs in place of air.

Mariana Trench is the form of boundary in the middle of two tectonic plates and this is evolution of subduction process. The deepest area is the plate of tectonic plates boundary. The fluctuation movement, micro tectonic plate is an evolved form of Mariana Island.

What’s the background of ‘Wait a minute who are you’ memes?

Who are African, Nigerian kids, which went viral in memes now?

What is the background of coffin dance song & meme?